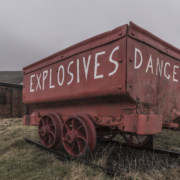 On my Kindle is a famous novel of a Welsh mining family, on my Spotify playlist a classic album from the cutting edge of the outlaw country music movement, and on my calendar, a reminder to write a blog. Obviously then, the subject will be the role of experience in storytelling.

At least a dozen times over the last 20 years I have had a client, a potential client, or someone who had no intention of ever becoming a client explain that they are sure I’m a good historian, it’s just that to write about a company you have to have worked there. Or to write about—let’s say The Society of Geophysical Engineers—you have to be a geophysical engineer. You can’t write about it unless you’ve lived it, I’ve been assured. Like a cart full of explosives, it seems, an institution’s story can be dangerous in inexperienced hands.

That seems, at first, to square with what I’ve been reading. How Green Was My Valley is a beautifully written novel about growing up in a mining town in South Wales during the late 19th century. The characters are organically Welsh, as sparkling as memories of the valley’s now-polluted stream and as consequential as the slag pile that rises ever higher over the once green valley. As I read I marveled at how well Llewellyn captured the experiences of his childhood.

Then there is Mr. Bojangles, an album of lyrically incandescent country-folk songs. Everybody knows that the title track was written from experience, that Jerry Jeff Walker actually spent time with an inebriant dancer “in a cell in New Orleans.” The masterpiece of the album, “My Old Man,” describes an itinerant musician with a “tattered bag for his violin” arriving in a (presumably) southern town, falling in love, fathering a child, and being drawn away, as always, by a steam whistle. Since “Mr. Bojangles” was based on experience, I’d assumed “My Old Man” offered an approximation of Walker’s origins.

The authors of How Green Was My Valley and “My Old Man” had much in common, but it was not that they wrote from experience. As his novel hit the bestseller lists in 1940, Llewellyn insisted that he hailed from southern Wales. That was not so, we learned after he died. He was from suburban London and his name was not really Richard Llewellyn. He was just a great storyteller who had done his research. Jerry Jeff Walker did a lot of things (especially when under the influence, which he often was) but he never fudged his origin story. He was a middle-class kid from upstate New York named Ronald Clyde Crosby. The subjects of his songs had just led me to assume otherwise.

Perhaps, despite what I’ve been assured over the years, you do not need to live it to write about it. Perhaps you just need to be a great storyteller who knows where to look for a great story. Richard Llewellyn was posthumously accused of duplicity, but nothing can detract from the book that he had drawn, in part, from the life of his Welsh grandfather. The hard-partying Jerry Jeff Walker never reached the heights that his 1968 album seemed to point toward. But “My Old Man” remains achingly poignant, even if it had nothing to do with Walker and his actual “old man.” The song was partly based, he later admitted, on his grandfather.