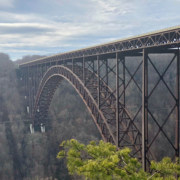 Last December, a 5,593-page omnibus bill made it through Congress at the last minute. Buried in the bill intended to provide COVID-19 relief and keep the government operating was a section promoting the New River Gorge National River to New River Gorge National Park and Preserve. Some legislation spends years in the hopper—this measure, it could be said, was eons in the making.

It begins with the river that locals and adventurers call “The New.” Most West Virginia rivers are as the song goes, “younger than the mountains,” but the New River is older. As the Appalachian Plateau rose up over millions of years between what is now North Carolina and West Virginia, the river stayed put, cutting through the sandstone from south to north as it rose. The most spectacular result is the steep-walled gorge, 1,600 feet at its deepest, that runs just east of Fayetteville.

That geological history has created one of the signature activities of the region—whitewater boating. Between the long-lost towns of Cunard and Fayette Station, 22 rapids—half of them formed by erosion of the steep canyon walls—present an exhilarating challenge to rafters and kayakers. Although more adventurous boaters tend to favor the nearby Gauley River, everybody ends up at The New eventually, since it is one of the few West Virginia rivers runnable year-round. While boaters pass below, rock climbers scale the ancient yellow Pennsylvanian sandstone that forms sheer cliffs near the top of the canyon.

Those not captivated by geology or high adventure can peruse Appalachia’s economic past, deeply etched in the New River Gorge. It started with logging, and traces of old lumber camps remain in places like Glade Creek, an open area at the southern gates of the canyon.  Coal mining followed, and visitors to the gorge today can hike to the early small-scale Kaymoor Mine. Although the largest of the New River coal fields are outside the gorge, it was along the banks of The New that the Chesapeake & Ohio built the railroad that served as a “conveyor for coal” between the rich West Virginia veins and the Atlantic coast. Coal trains still head up the gorge many times a day, past a restored railroad depot in the ghost town of Thurmond.

Construction of the C&O was once the stuff of “John Henry” legend, but the rails through the canyon are no longer the chief engineering marvel around The New.  That place goes to the New River Gorge Bridge. Before 1977 it took about 45 minutes to get from the east rim of the canyon, down to the bridge at Fayette Station (where the C&O once stopped) and back up to Fayetteville. The structure cut the crossing to about a minute and made history as the longest arch bridge in the world. The record lasted only 26 years, but the breathtaking bridge remains the chief attraction in the New River Gorge.

The section tucked into last December’s omnibus bill was partly about economics—the words “national park” ensure that hordes of new visitors will spend much-needed dollars in south central West Virginia. It was partly about conservation and environmentalism. Since the creation of Yellowstone in 1872, the national park ideal has been to preserve natural wonders and inspire Americans. But it was also very much about legacy. The sponsor of the title, Republican Senator Shelley Moore Capito, has strong historical ties to the state and to The New River Gorge National Park. It was Capito’s father Arch Moore, as governor of West Virginia, who presided over the construction of the New River Gorge Bridge in the 1970s.