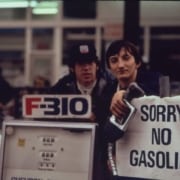 This afternoon I went out for a few groceries. Five minutes from home I encountered a sight that resurrected long buried memories from my youth. On one block there were a dozen cars clogging traffic lanes to line up at the local Sunoco station. Around another corner were at least a score of vehicles jockeying for position like gum balls in a chute, determined to land by the pumps at the local 7-Eleven Store. I had seen this before.

As America entered the 1970s the outlook for the domestic oil industry was bleak. The United States had once dominated the industry, but since 1955 the number of drilling rigs had been dropping steadily. Experts in the subject (who almost no one listened to) were already warning of an “energy crisis” by 1971.

Then, on October 6, 1973, Egypt and Syria launched the fourth and most destructive of their serial wars against Israel. The sentiment in the United States was predictable; America would have to back up its long-time ally.  There was a problem though. Recently the United States had become addicted to foreign oil—imports had doubled from 1970 to 1973 alone. Much of that oil came from Middle Eastern countries allied with Egypt and Syria; most of it came from nations who were members of OPEC (the Organization of Petroleum Exporting Countries). And OPEC was dominated by Saudi Arabia’s Sheik Ahmed Zaki Yamani.

The United States helped Israel as expected. OPEC retaliated with rolling cutbacks. The big oil companies anticipated trouble, but no one expected what happened on October 20, 1973, when Sheik Yamani cut off the United States entirely. The administration had not been sitting on its hands. In attempts to smooth out problems it created an allocation system. It was unfortunately rigid, keeping too much gas in some locations while leaving others high and dry. Prices rose nearly 50 percent, a strong market signal, but consumers ignored it. They went out to top off their tanks anyway, resulting in traffic jams, long lines, and “sorry no gasoline” signs.

The 1970s oil crisis marked a turning point. Up to that time, we Americans had generally believed that our abundant resources and our exceptional political system would ensure “the good life” for generations to come. Overnight that first tenet was shaken: the administration appointed an “Energy Czar” (which most Americans thought entirely appropriate) and average citizens began to wonder if it was realistic to believe in an endless supply of fossil fuel. In a sense, the fear and panic instilled in the gas lines provided a visceral sense of urgency lacking in the abstractions that swirled around Earth Day three years earlier.

In one of those truth is “stranger than fiction” moments, it was also on October 20, 1973 that Richard Nixon fired special prosecutor Archibald Cox for being too persistent in investigating Watergate. So on the same day that belief in unlimited abundance began to waver, our collective confidence in American governance began to crumble too.

The legacy of both events of October 20, 1973 remains with us, but only in traces. Handwringing about “limits” and Watergate culminated in the presidency of Jimmy Carter, but by the time of his dismal “malaise” speech (issued during a second oil shock in 1979), the majority of Americans were tired of pondering limits and responsible governance. In the 1980 election cycle Ronald Reagan smiled, assured everyone that things would be fine without any effort on their part, and won the presidency handily. Still, for over half a decade, mainstream Americans had been willing to think about more than comfort and convenience and were hesitant to place full faith in the benevolence of unbridled capitalism.

Once again motorists are lining up to top off the tank and gas station employees are getting their signs ready. But this crisis is regional, caused by problems involving a particular pipeline. And we have become accustomed to spectacular glitches created by our computerized economy: for drivers beyond the Southeast, the current gas station inconveniences are just a new version of the recent Game Stop imbroglio. It is too bad that the architect of the 1973 oil crisis missed this minor recapitulation of his greatest accomplishment. Sheik Yamani’s death two months ago was little noticed among all the Game Stop headlines. Remember him while you’re waiting in a gas line today, and for just a moment it will be 1973 all over again.